Have you ever been tempted to give up on something or someone?

There are times in life when we’re tempted to give up on projects, situations and people. Our endurance tank is depleted and our patience is spent. Internally, we shut down and resign ourselves to what seems to be the inevitability of defeat. In short, we give up.

Often this is the case with prayer. There are many prayers that are aborted far too soon. Because we fail to get an answer, experience a breakthrough, or see a change, we shut down our prayers, give up and resign ourselves to the status quo.

Jesus understood our tendency as human beings to give up too quickly, especially in prayer. That’s why He emphasized persistence when we pray:

One day Jesus told His disciples a story to show them that they should always pray and never give up. — Luke 18:1 (NLT)

An example from the life of the Apostle Peter teaches us a valuable lesson about persistence in prayer. In Acts 12 we find the story of persecution against the early church by King Herod Agrippa. Herod killed James, the apostle, and proceeded to arrest Peter. The plan was to put Peter through a fixed trial and kill him as well. The early church went to prayer, and God miraculously delivered Peter from Herod Agrippa’s diabolical scheme. 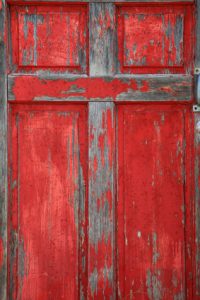 Upon Peter’s release from prison through a God-sent angel, Peter headed to the home of the believers who were praying for his deliverance. He expected quick entrance to the safety of the house and a great celebration for what God had done for him.

When Peter got to the home where the prayer meeting was being held, he knocked on the door. A young lady named Rhoda went to the door and asked who it was. When Peter identified himself, she recognized his voice and was thrilled. She was so overwhelmed with joy that God had answered their prayers for Peter’s freedom that she forgot to open the door for him! Instead she ran back to the group announcing that Peter was outside waiting to come in. The response of the group was less than faith-filled or enthusiastic. The very people that were praying for his release didn’t believe he had been released! Take a look at what they said:

While all the commotion and conversation about Peter went on inside the home, Peter was left standing outside — at the door!

What did Peter do? The Bible tells us:

Meanwhile, Peter continued knocking. When they finally opened the door and saw him, they were amazed. — Acts 12:16 (NLT)

Peter had to keep on knocking before the door was opened to him.

Why did Peter have to keep on knocking? Because there were things going on inside the house that Peter couldn’t fully see, hear or understand. Beyond Peter’s closed door, people were debating, expressing their doubts, and responding to appeals from the young woman who had answered the door. Resolving these things required some time. Had Peter given up knocking, the “entrance” or “open door” to him would not have happened. His continual knocking was the key to his open door.

From this story, we find a wonderful lesson about persistent prayer. When we’re praying in line with God’s Word and will, it’s important for us to keep on praying. Not because God is deaf to our cries or resistant to our requests, but because there are activities happening in the unseen realm that we cannot see or understand. Our persistent prayers are necessary because they continue to press against the works of darkness, the reality of natural circumstances, the sin and selfishness of our humanity, and the opposition of our spiritual enemy. Over time, as we pray, the spiritual tide is turned in favor of God’s will! He prevails! Persistent prayer brings breakthroughs that otherwise would never happen.

Are you tired of praying about something or for someone? Don’t quit! Don’t give up! Keep on knocking. It’s one of the Kingdom keys to breakthrough.