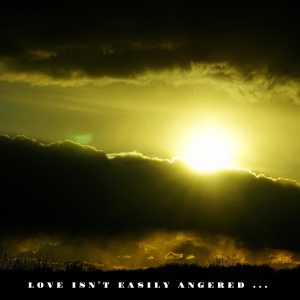 When was the last time you lost your cool? Do you recall a time recently when you allowed something someone said or did to get the best of you? Before you realized it, you reacted in anger, saying something you shouldn’t have said or behaving in a way that embarrassed you or others?

Everyday in homes, work places, and a variety of other environments, people pop off at others in anger. Sometimes the tense interactions are quickly forgiven and forgotten and people move along without lasting relational damage. But far too often these brief, mercurial moments produce lasting negative impact on people.

Spouting off at a spouse, a child, a co-worker, a friend or neighbor may feel good for a brief moment, but it’s usually creating a lot more damage than you see or realize. Outbursts of anger eat away at the core of relationships. They create distance, destroy trust, and slowly but surely drain the love tanks of both the person on the giving end and the receiving end. Frequent tirades and temper tantrums reveal a lack of self-control, an attitude of disrespect, and earn you an uncomplimentary reputation. They drive people away from you. Angry people have very few real friends. It’s hard to hug a porcupine!

The Bible says that “Love … isn’t easily angered” (See 1 Corinthians 13:5, NIV). When the God-kind of love is ruling us, we control our emotions, we filter our thoughts and actions, we apply brakes to our reactions. We guard against anything that diminishes the dignity and damages the soul of someone else. Our goal is to work positively and productively through the conflicts and frustrations of relationships so that, in the end, problems are solved, progress happens and people feel valued.

The next time you’re tempted to react in anger, respond in love instead! 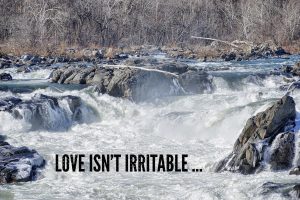 What do the following words have in common: cranky, cross, crotchety, fiery, grouchy, grumpy, irascible, peevish, perverse, pettish, petulant, prickly, quick-tempered, raspy, ratty, short-tempered, snappish, snappy, snarky, snippety, snippy, stuffy, testy, waspish, out of humor, and out of sorts? Other than being personality labels we don’t like, they’re all synonyms of one word, IRRITABLE!

When life pressures, people frustrations, hard circumstances, blocked goals, limited progress, disappointments and delays weigh heavy on us, we can all become irritated. This is normal. These are things we hopefully learn to manage more effectively as we mature spiritually, emotionally and relationally.

Irritability describes someone who is easily, quickly and consistently irritated. It’s a habit that develops over time. When a person regularly gives themselves permission to be testy, snappy, cranky, grouchy (see the synonyms above), what are occasional moments of irritation soon morph into an irritable personality.

The Bible says, “Love isn’t irritable!” (See 1 Corinthians 13:5, NLT). Not only is irritability not good for you, it’s hurtful to others. It adds unnecessary pain to your relationships. Irritable people irritate people! What’s in you, spills out and on to the people around you. If you are continually irritable, you’re spewing toxic emotional waste into your environments. You’re polluting people with your personal poison. Certainly not a loving thing to do!

How can you become less irritable? Detox daily will God. Offload your pressures to Him. See the people around you as friends, rather than foes. Work to be a person who de-stresses environments. Check your mouth. Chill down. Choose positive, pleasant approaches to problems and people! Stop irritating and start soothing!