Sometimes life is beyond hard; it’s impossible! Webster defines impossible as “unable to be done or to happen.” There are things that come our way that require something we don’t have, can’t do, or are powerless to make happen. Some things aren’t just hard, they’re impossible for us. What do we do when these challenges come our way? 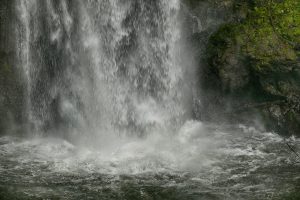 The Israelites in the Old Testament had one of these moments at the edge of their Promised Land. After four long, tough decades of walking around in the wilderness, it was now time for the Israelites to step into the land God prepared them. They were camping on the eastern shore of the Jordan River and the Promised Land was west, over the river. To get in they had to cross the Jordan. To make a challenging situation worse, the river was flooded. The massive amount of water, and the strong currents during flood season, meant that crossing couldn’t and wouldn’t happen without a miracle.

God gave Joshua a clear set of instructions for leading the people in. Take a moment and read this part of the story and what happened when the people obeyed:

Joshua 3:11-16 (NLT) Look, the Ark of the Covenant, which belongs to the Lord of the whole earth, will lead you across the Jordan River! Now choose twelve men from the tribes of Israel, one from each tribe. The priests will carry the Ark of the Lord, the Lord of all the earth. As soon as their feet touch the water, the flow of water will be cut off upstream, and the river will stand up like a wall.” So the people left their camp to cross the Jordan, and the priests who were carrying the Ark of the Covenant went ahead of them. It was the harvest season, and the Jordan was overflowing its banks. But as soon as the feet of the priests who were carrying the Ark touched the water at the river’s edge, the water above that point began backing up a great distance away at a town called Adam, which is near Zarethan. And the water below that point flowed on to the Dead Sea until the riverbed was dry. Then all the people crossed over near the town of Jericho.

What’s the lesson for us? While much of what God does in our lives is the result of processes, time and our responsible actions, He is also the God of miracles!