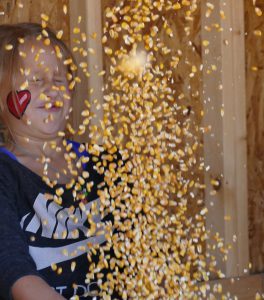 Survival is about making it through something. To survive is to endure a difficulty or challenge with little or no margin.

Thriving is something else. Merriam-Webster dictionary defines thriving as growing, developing, flourishing and succeeding. To thrive is to do more than endure. It’s to come through or handle something in a way that results in growth, development and increased margin.

The Israelites were confronted with the difference between surviving and thriving when they finally entered the Promised Land. For forty years they survived the wilderness journey by God’s gracious daily provision of manna. Each morning, except on the Sabbath, they simply stepped out of their tents and collected their food. God provided and they survived. This miraculous provision lasted four decades. And because of it the Israelites endured the harsh, barren desert.

When they came into Canaan, this changed:

Joshua 5:10-12 (NIV) On the evening of the fourteenth day of the month, while camped at Gilgal on the plains of Jericho, the Israelites celebrated the Passover. The day after the Passover, that very day, they ate some of the produce of the land: unleavened bread and roasted grain. The manna stopped the day after they ate this food from the land; there was no longer any manna for the Israelites, but that year they ate the produce of Canaan.

Once in the land of promise the manna stopped. As each tribe occupied their assigned territories, they had to become farmers, herders, developers and producers. Why? Because God was moving them from surviving to thriving — from basic provision to a life of productivity.

The miracle of the manna was never meant to be permanent. It sustained them on their way to their destiny. The Promised Land was more than a place of provision. It was a place of production.

Don’t just survive, thrive! Be a producer. Others will be blessed, and you will be too!