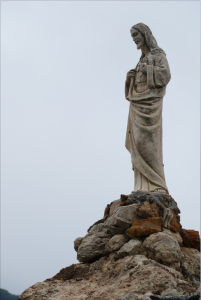 One decision can set the course of your future, positively or negatively. Never underestimate the power of your choices!

Take a look at the following story and the lessons it teaches us about our decisions:

Ruth 1:15-17 (NIV) “Look,” said Naomi, “your sister-in-law is going back to her people and her gods. Go back with her.” But Ruth replied, “Don’t urge me to leave you or to turn back from you. Where you go I will go, and where you stay I will stay. Your people will be my people and your God my God. Where you die I will die, and there I will be buried. May the Lord deal with me, be it ever so severely, if even death separates you and me.”

The first chapter of the Bible’s book of Ruth describes a very sad situation. An Israelite woman named Naomi, along with her husband and two sons, settled in Moab to survive a time of famine in Israel. The sons grew up and married Moabite women; Orpah and Ruth. Eventually all three husbands died, leaving Naomi, Orpah and Ruth as widows.

Naomi decided to head home to Bethlehem. Multiple times Naomi tried to persuade Orpah and Ruth to stay behind in Moab when she returned.

Without realizing it, Naomi was being used by God to administer a very important test of character, commitment, loyalty and love to Orpah and Ruth. The destinies of these two women would be determined by this one decision: Would they forsake their relationship with Naomi or stay with her? Would they follow her and her true God, or would they stay in the idolatrous land of Moab? Would they pass or fail this God-administered test?

They each made their decisions. Orpah chose to stay in Moab. Ruth, with great passion, chose to stay with Naomi. This one choice–the choice to remain committed–positioned Ruth for her marriage to Boaz, the eventual birth of a boy named Obed, who became the father of Jesse, who became the father of David, from whose line came Jesus Christ, our Messiah! This one decision put Ruth in the human genealogy of Jesus! Passing this test made a major difference in her life!

God gives us tests from time to time. They are unannounced. And all too often, they are overlooked. How we handle these tests is extremely important. Throughout the Bible you find stories of people like Orpah, who failed their test and slip off the pages of Scripture into obscurity. You also find stories of those like Ruth, who passed their test and were supernaturally propelled forward into an incredible future, and to a lasting legacy.

What’s one of the lessons from Ruth’s life? It pays to pass the tests God gives us! We’re wise when we’re on the look out for His unannounced tests. Passing them is important. It’s one of the keys to fulfilling God’s plans for your life.