Before the Passover celebration, Jesus knew that his hour had come to leave this world and return to his Father. He had loved his disciples during his ministry on earth, and now he loved them to the very end. It was time for supper, and the devil had already prompted Judas, son of Simon Iscariot, to betray Jesus. Jesus knew that the Father had given him authority over everything and that he had come from God and would return to God. So he got up from the table, took off his robe, wrapped a towel around his waist, and poured water into a basin. Then he began to wash the disciples’ feet, drying them with the towel he had around him.When Jesus came to Simon Peter, Peter said to him, “Lord, are you going to wash my feet?” Jesus replied, “You don’t understand now what I am doing, but someday you will.” “No,” Peter protested, “you will never ever wash my feet!” Jesus replied, “Unless I wash you, you won’t belong to me.” Simon Peter exclaimed, “Then wash my hands and head as well, Lord, not just my feet!” Jesus replied, “A person who has bathed all over does not need to wash, except for the feet, to be entirely clean. And you disciples are clean, but not all of you.” For Jesus knew who would betray him. That is what he meant when he said, “Not all of you are clean.” After washing their feet, he put on his robe again and sat down and asked, “Do you understand what I was doing? You call me ‘Teacher’ and ‘Lord,’ and you are right, because that’s what I am. And since I, your Lord and Teacher, have washed your feet, you ought to wash each other’s feet. I have given you an example to follow. Do as I have done to you. I tell you the truth, slaves are not greater than their master. Nor is the messenger more important than the one who sends the message. Now that you know these things, God will bless you for doing them. — John 13:1-17

There is a tradition during Easter week called Maundy Thursday. The English word “Maundy” comes from a Latin word meaning “commandment.” It’s celebration focuses attention on the Upper Room and the Last Supper, especially the act of foot-washing by Jesus of His disciples, and the commandment He gave His disciples to show their love for one another by doing the same. 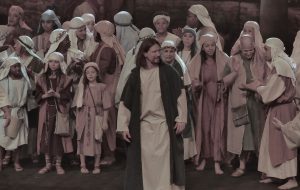 This is one of the most incredible and instructive stories of Jesus’ life in the entire New Testament. It took place on the Thursday evening before Jesus’ crucifixion on Friday. It happened in a rented room in Jerusalem.

Think of who was in the room, around the table that evening, and what was going on in the people present.

Yet Jesus washed feet. He demonstrated His love for these men by doing for them what they were not willing to do for Him or for one another. Jesus rose above the ugly, negative atmosphere that night. He didn’t let the environment defeat Him. He did the real work of leadership. He led by example. He lifted the spiritual bar by the attitudes and behavior He demonstrated.

The world needs leaders, especially spiritual leaders. Negative people and environments need mature influencers who lift atmospheres by their right and humble actions and attitudes. They step in and step up, and lift others up with them to think, act, speak and do better. They’re out front with their example. They don’t tell people to “wash feet,” they get down on their hands and knees and show others how to wash them.

What does it take to be such a leader?

To be a Jesus kind of leader, you must lift, not lower. Show, not just tell. Inspire by example, not just instruct from a distance. People need to see you do the real work of serving.

Be a Jesus kind of leader!