The next day, on the Sabbath, the leading priests and Pharisees went to see Pilate. They told him, “Sir, we remember what that deceiver once said while he was still alive: ‘After three days I will rise from the dead.’ So we request that you seal the tomb until the third day. This will prevent his disciples from coming and stealing his body and then telling everyone he was raised from the dead! If that happens, we’ll be worse off than we were at first.” Pilate replied, “Take guards and secure it the best you can.” So they sealed the tomb and posted guards to protect it. — Matthew 27:62-66 (NLT)

Nothing is in the Bible accidentally or without purpose. This is true of today’s passage. It’s an important part of the Easter story. 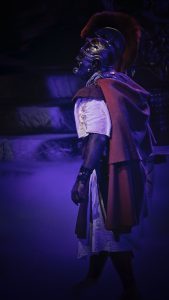 After Jesus’ crucifixion and burial on Good Friday, the Jewish religious leaders were concerned that Jesus’ disciples would secretly slip into Jesus’ tomb, steal His body, and propagate a hoax about Jesus being alive again.

To ensure that this didn’t happen, certain leading priests and Pharisees appealed to the Roman governor, Pilate, to give orders for special sealing and guarding of Jesus’ tomb. Pilate did so. And as Matthew stated, “they sealed the tomb and posted guards to protect it.”

Without realizing it, the actions of Pilate and these religious leaders ended up validating the reality of Jesus’ resurrection! Because His tomb was sealed by Rome and guarded by soldiers, only a true resurrection could and would bring Jesus from the grave. The presence of these guards at the tomb settled any issue of a fabricated resurrection story. It provided another important reason to know and believe that Jesus really did rise from the grave!

And because Jesus rose from the grave, we know that He was and is who He said He was, the “resurrection and the life,” the promised Messiah, the living Savior, and the true, One and Only Son of God!